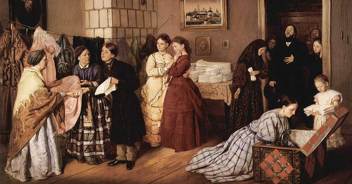 I should say just survived as just before the pandemic hit the City of London were proposing re-allocating the moneys to other charitable purposes; however I am unclear whether this has happened…

Calendar customs are not always very evident some are small and rather private affairs; Signor Pasquale Favale bequest is one of these. My attention was first drawn to this by accident reading notices outside of a church and was curious to find out more.  The bequest reading:

“poor, honest, young woman, native of London, aged 16 to 25 who has recently been, or are about to be married”

A marriage made in heaven.

Favale was an Italian married a London girl and was married for many happy years with her in such that when he died in 1882 he stipulated in his Will of the 25th March that 18,000 Italian francs (around £720) should be used to provide a yearly dowry to three girls as his wife ‘was a native of the city’ and that ‘he had many happy years in the city’. Like all such bequests there were stipulations. Firstly that they should be born in the city that they should be born in the City., be poor, honest young women. They should be aged 16-25 and who had recently been, or were about to be, married. Thus be doing so he set up Britain’s most unusual bequest and custom. Thus every July the trustees of the charity decide upon the beneficiaries. Of course finding these beneficiaries is not easy – hence the sign on that church door -doubtlessly multiplied across the city. 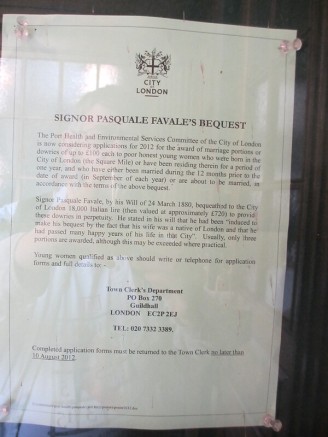 Outside St Botolph Without Bishopgate copyright David Brown via Flickr

18000 Italian francs was around £720 which after expenses needed to set up the foundation he required; the residue was too small for the interest in it to be enough to put the bequest until effect until 1914, but for over a hundred years it has been given.

When the money was left dowries were common practice from the bride’s families to her husband and perhaps he was concerned that many prospective women lost out because of the lack of money or was he bitter that his wife’s family never provided him with one?

For richer or poorer?

Of course wording of the bequest has been problematic. When the City of London became the trustees the necessity that recipients be born in the City was removed. Very few are more within the square mile of the city, especially since St Barts closed its maternity unit and those that might be are unlikely to be ‘poor’ but I’d hope they were ‘honest’!

Such that since 2000 the bequest states that it should award:

“Marriage Portions to poor honest women who were born within the City of London or have resided therein for the period of at least one year, and who either have been married within the period of twelve calendar months next preceding the date of award or who are about to be married”.

As a report by the City of London states:

“Although the terms might make bestowing the gift difficult – finding a ‘poor’ resident of the City probably poses as much of a challenge as determining whether she is ‘honest’, the tradition continues.”

One of the most recent recipients has been Lorna Emmett a 31-year-old chartered accountant, Lorna Emmett, who married her husband in Hampstead in May. She received the £150 dowry. Another recipient stated:

“It was actually the concierge at my building who pointed it out. I thought it would be nice to be part of such a romantic tradition and it will also make a small contribution to the wedding expenses!”

Indeed £150 probably does not go far these days and this is what is probably behind the move to consolidate the charity with others and use the moneys elsewhere. Interestingly, there are many poor and honest brides outside of the city boundaries who would no doubt benefit but it does not seem that that method of changing the bequest has been explored!

One do hope that the bequest does not disappear into an amorphous charity pot and that brides still benefit for years to come…despite its rather antiquated idea behind it.