St Margaret at Hope is a settlement which sweeps along its harbour, an important port for the ferry too and from mainland Scotland. I wonder how many passengers are aware of the village’s unique custom – the festival of the horse and boy’s ploughing – really in essence two customs.

As I arrived boys and their parents were arriving clutching their tiny ploughs. Inside the school other parents feverishly dressed their children to resemble shire horses, perhaps one of the county’s most curious of customs. Outside a crowd gathered entertained by a local band doing their own rendition of ‘Road to’ in a Phoenix Nightseque fashion. At first the boys existed proudly holding their ploughs and sat down on a bench. Then the sound of a piper could be heard flowing out of the school and then sparkling and clanking lined up in front of the ploughboys, ready to be judged.

The aim of the costume is to represent the shire horses which would drive the plough in their ceremonial dress. As such the dress would include a large collar, blinkers and feet decorations. Around their neck was a large heart which would indicate symbolically their name. The costumes are a mixture of old and new, some of the oldest being handed down through generations having real horse red white and blue pompoms and horse hair dating back 50 years ago. The basis of the dress would be the Sunday suit which could be easily adapted to do the job. In a report Moira Budge chairperson of the South Ronaldsay Ploughing Match in The Scotsman :

“We have known of a baker’s family who used cake frills around the feet to look like the feathers of a heavy horse. There was also a newsagent who used the trinkets and brooches that sometimes came with magazines…People just used what they had and the adornments were sewn onto the Sunday suit. In the past it was very basic as it had to be sewn on and taken off again before Sunday…Once people had more money, they could keep a suit aside and the decorations became more fancy. Next year, they would add a bit more.” 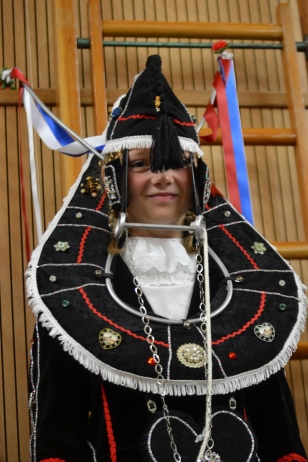 To ensure the costumes were ready and in their finest condition work would begun back in April I was told, often old broaches and personalised jewellery would be added. Despite their apparent complexity many parts of the costume would be easily made. For example the collar would be made first from cardboard with foam laid on it and them covered in fabric. The backs are almost as decorated as the fronts with gold braiding, necklaces, broaches, tiny mirrors and shining bells perhaps to ‘reflect away’ bad luck. The costumes themselves have a sort of Scandinavian feel about them – perhaps not surprising as Orkney was Norse until the 1400s.

“All the items are profusely decorated literally like the most overloaded Christmas tree, with bells, baubles,, tinsel, beads, rosettes, ribbons, tassles, plastic flowers, cracker novelties and anything else which may come to hand during the several generations it took to being hem to their present advanced state. You could hardly see the girls underneath it all.”

The array of costume differences is quite amazing considering the limited pallet of what this costume could consist of. Some incorporated real horse harness and I was amused to watch one participant chewing on their bit. Girls with long hair would have it platted to mimic that done to the shire horses and fake tails would also be added.

The parade did not last long, soon a massive cloud appeared from nowhere and the brightness which bounced off the bangles and bits disappeared and everyone ran inside. Here dutifully the ‘horses’ stood on their podium and the judging continued. Amusingly like horses, parents administered cold drinks by holding them up to them with draws or feeding their sweets as the ‘horses’ could not hold them themselves as they had fake hooves in some cases. I was very impressed with the stoic nature of the ‘horses’ standing so still under what must be very heavy and hot clothing and conditions. Even the youngest were patient and keen to smile when the cameras looked in their direction. Only one after around an hour of standing decided to have a break. On the announcement of the best dressed and best harness, the winners dutifully stood forward. I spoke to the two judges, who had just that week come from a judging of real horses, said it was difficult to judge the best dressed as it was subjective, but as the harness had to have specific pieces – eg bit, blinkers etc, this was easier as some had forgotten to include some items – no doubt out of comfort!

Not only would the horses be judged but careful consideration was made of the ploughs. These ploughs being often family heirlooms and could be nearing 100 years old. The judge carefully examined each running their hand gently along the side, feeling the balance and examining carefully the blades. Then there would write careful notes in their notepad considering the best wooden and metal ploughs. Originally they pretended with a stick with an Ox hoof tied to it. Then a local blacksmith called Bill Hourston made a replica plough in 1920 which clearly caught on and subsequently all the participants had miniature ploughs. 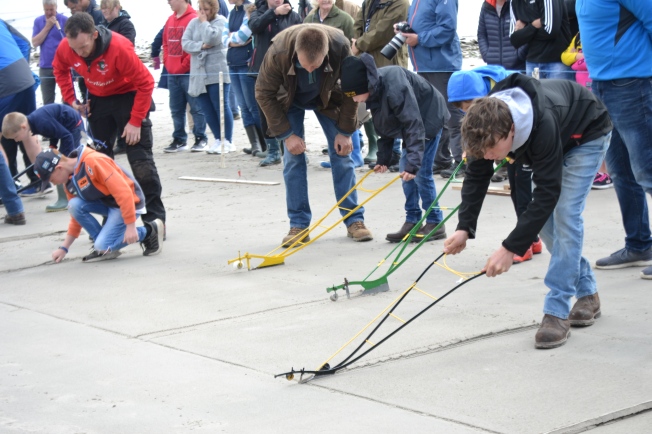 When does the custom come from? I have heard it claimed that the dressing of the children as horses has pre-Christian origins being linked to the horse whispering tradition. However, as in many other counties the farmers of the settlement would have ploughing matches, where their skills would be tested and ploughs and horses inspected. Uniquely, however in this part of Orkney perhaps the children looked on and wanted to copy or some farmer worried about the lack of youth uptake in ploughing established it to encourage both the development of ploughing skills and foster a community spirit and good old fashioned competition. Early records of the custom are hard to locate and everyone I spoke to their stated it probably started in the late 1800s. The ploughing match has a common sense origin it was for the ploughmen to teach their sons the technique.

Perhaps as one could not breed miniature horses, the girls would have to get involved and pretend to be the horses. A far more sensible explanation, and so much for the pagan origins claimed by some reporters! Apparently there were similar events held at Burray and Stronsay. That of South Ronaldsay almost died out and the second world war being revived after a ten year hiatus by a local bank manager Norman Williamson and it has continued ever since. It is thought that the girls became involved after World War II, beforehand the horses were younger boys and indeed despite it being stated that the horses were girls there was one boy in attendance which in a way is probably more traditional and less likely to be highlighted as sexist! Always aware of the potential of how bad weather and tourism can stall and feed a custom, in the 1960s it was moved from the children’s Easter holidays to the summer in hope of better weather and more tourists!

As soon as the ‘horses’ were judged and the dark clouds disappeared everyone jumped into their cars and off to the Sand O’Wright for the ploughing. Originally done inland, at Hope Kailyard, and at some point it was noticed that judging would be easier on the sand. Here earlier two ploughing veterans select an area of sand with minimal stones and the right moisture – too wet nor too dry. They then scrapped off seaweed, measuring the area out with a wooden set to square off the flats. Soon small groups of plough boys were practicing, listening to the sage advice of the adult, themselves retired boy ploughman.

Each boys selects a four square area called a flat each which are numbered and compete for the three categories Champion, Ordinary and under 8s. As the Boys ploughing began to start there was a real look of concentration on the faces of all the boys and a nervous look on their helpers. The boys had 45 minutes to do the plough their lines. I asked what the judges would be looking for. One told me it was for straight and consistent lines in the upward and both downward plough, equal spacing neat and evenness being particularly valued. Indeed, I was impressed how neat they were and it was clear considerable pride was taken in them.

It was difficult not to be impressed and the way in which children from 5 to 15 got involved with intensity and enthusiasm. I spoke with one of last years’ champion class who was nervous at winning this year and remarked that he was not as neat with his handwriting as he was with the plough.

Sadly the ferry prevented me for attending the whole session and seeing who obtained the best finish and start, the straightest and the evenest. However, as a custom it is without doubt the most successful in providing both a community spirit and a colourful and unusual spectacle.