The last custom I attended before we dived into national lockdown in 2020 was the annual Good Friday at Rivington Pike, those it seemed fitting that the first post Lockdown Easter custom I should attend is the other noted Lancashire Good Friday custom at Holcombe Hill, near Ramsbottom, Lancashire. 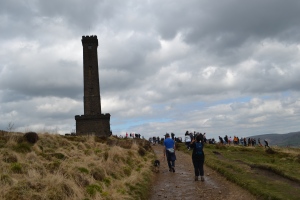 The Holcombe Hill Good Friday custom is noted in virtually all folk customs books but usually as an aside in a list of egg rolling locations; which is not particularly useful as it is often coupled with Bunker’s Hill, Derbyshire, which I am pretty sure is no longer extant. And whilst other egg rolling customs get some detailed accounts made, these days usually online, Holcombe’s custom appears to have been so under the radar, that before the pandemic hit, I doubted it actually happened. Or certainly that it did not happen in the same vigour as that of Rivington. However clearly I was wrong and it was the pandemic that indicated that it was very popular when this appeared in the 2021 Manchester Evening News:

“For the second year in a row, a popular children’s tradition is set to be cancelled.

Egg rolling at Holcombe Hill is an unusual event that takes place at Easter each year and has a history dating back centuries.

If you live in the area you will almost definitely have heard of it and might have been among the crowds of onlookers gathered to watch and cheers as youngsters roll painted boiled eggs down the hillside…..

Despite this long history, authorities have advised that no egg rolling take place at Holcombe Hill this year as large crowds ‘would make social distancing impossible’.

The car park on Lumb Carr Road will be locked over the Easter weekend to dissuade people from driving to the hill.

Coun Andrea Simpson, Bury council’s cabinet member for health and wellbeing, said: “After a year of lockdown, we’re all desperate to get out there and enjoy the countryside, and get our lives back to normal…..Thousands of people mixing together at Easter carries a very real risk of causing infection to spread and making people very ill.”

Bar this there is little else recording it bar a mention in 1908 of someone selling sweets at the top in the Bury News and perhaps the original focus of the custom the Church service first recorded in print in 1949 as far as I can gather.  Sadly in many well-known customs people feel it is unnecessary to write anything about them…until now!

So I decided to attend in 2022 and experience the custom. With such rather informal affairs it is always difficult to know what time to attend. If the church custom still happened at the foot of the hill it would have been good to attend, but finding details of this was more difficult and it would appear to be bit early…so I aimed for midday.

Arriving there on a sunny Good Friday thankfully it was clear that there were already many on the summit of Holcombe Hill by the large number of cars crammed along the streets of the small village in its shadow. After finding a parking place, I noticed the large numbers of families with the children clutching egg boxes…meaning only one thing…egg rolling.

At the base of the hill one could see the small figures of people at the top appearing like spikes on dinosaur either side of the dark shadow of the Peel Monument on top. Indeed, there was a steady stream of people of all ages ascending the summit which felt at times more like a mountain than a hill! On the way, there were bits of egg shell. Did they land here or did they not make it?

I spoke to a number of people as they ascended the hill and asked them why they did it. One commented that ‘it was a family tradition’ and another said ‘I remembered going to the summit with his father and grandfather’ I asked did you go with eggs and one could not remember and the other said ‘why yes of course’. I also asked why they did it and another stated that ‘it was just a ritual a way of burning off a big lunch’ another said it was to ‘remember to the Calvary!’

At the top there was a large number of people, mainly eating their lunch, and then like a steady stream, going down to the edge of the hill with their eggs. I peered into a couple of egg boxes to see some neatly painted eggs; indeed some looked stained in the traditional fashion. I joined the families to see how they were rolling them and the answer was they werent! The hill unlike every other site for egg rolling had no good slope. Much of the hill was covered with thick heath and bracken. Instead the children went to the edge of the cliff, one ledge looked pretty precarious and there the aim being to get they either as far as possible, as smashed as possible or both and beneath a large rocky outcrop -the main aim of their projectiles, was splatted with eggs and shells like a giant omelette attempt! It seemed that this was the usual practice for the children confirmed by one of the older men with his grandchildren…and as such I was surprised it had not been recorded before!