“charged his lands in St. Ives with the payment of 40s. a year to be distributed to poor widows and fatherless children, and with a further sum of 6s. to the churchwardens to be given to the bellringers.“

St Ives is a delightful small town which is noted amongst those interested in calendar customs for its bible dicing, however there is another custom that the town has undertaken for the last 300 years or so which has failed to be recorded as far as I am aware in any books on calendar customs. So for the 10th year of blogging on calendar custom it felt appropriate that I experienced and being free on the day of its distribution the 5th of January, linking it to epiphany no doubt it felt this was the ideal opportunity.

The custom consists of a dole given out on or around the epiphany and fortunately being free this year. It was set up as stated above in 1656 by local philanthropic St. Ives man, Robert Langley and whilst there is no stipulations about fatherless children it is still distributed to poor widows (and grammatically now widowers). The tradition is known as the Langley Bread and continues as a giving practice once a year in January.

I arrived to see the truck outside the Corn Exchange loaded with Co-op bags drive off – hand I missed it – no for as I went into the main hall of the building to see tables bellowing under a pile of green Co-op bags crammed with food and the Mayor in his chain, the trustees of the charity and town council secretary awaiting the first of the applicants.

In 2022 there were 120 bags lined up on the tables. Around 45 being delivered each year to local nursing homes. The number had been adjusted to take into account the number of recipients who came the previous year and thus the number left over.

Soon the first applicants appeared and many of them for familiar faces who had come previously to collect their bag of goodies and as a local newspaper account records:

“Great care is taken to ensure that only widows and widowers who are residents of St Ives benefit. As people come in to the building, they give out their addresses which are checked on the electoral roll.”

Indeed the clerks asked for names and they searched carefully their electoral role and upon finding them crossed them off and gave the recipient a ticket. However it was only a few feet away where the Mayor was ready to collect the ticket and give over the bag.

Many of the recipients were ‘regulars’ and despite having to be checked on the role many had come for the chat as well – being lonely widowers this would of course make sense. Indeed there was a sort of melancholy to the custom typified by one recipient stating

Sadly we all know what that means. But on the flipside it also encouraged people to talk to each and help each other as recorded in the newspaper article which stated:

“one person is authorised to collect for friends.

“Especially where the old folks’ bungalows are, the fittest one will come down and collect them for their neighbours,” said David Hodge, who as mayor is responsible for giving out the bags. “Hence, they come with a list and they then go back with some for all their friends. It is checked, honestly!”

One could see that for many lonely widows it was a good reason to get into town and perhaps socialise or in some cases challenge the Mayor on their policies.

The trustees stick very rigidly to the wording of the charity. A man turned up from nearby Reach and politely asked if he was eligible having been born in St Ives and was a widower. He however was refused as he no longer lived in the town. He seemed okay with that and it was interesting to see that the letter of the original bequest being undertaken.

Now however very little of the original charity money goes to buy the dole and is donated by local companies. In 2022 it was donated for the third year from the Co-Op. Back in the 1800s it would have simply been bread like many other doles. However, now its full of other staples.  The bag consists of digestive biscuits, tea, bread, butter and sugar and were delivered by the company on the back of truck at 8 o’clock. Usually I was informed that it was topped up by the charity and this included orange juice or jam but this year they could not be sourced.

Two for the price of one!

The Langley bequest is actually two customs in one as he left money for the bell ringers from St Ives’ parish church. The reason being because of a very familiar story seen elsewhere is bell tolling bequests. It is said that Langley was lost in a snowstorm on nearby Hemingford Meadow walking to St Ives. Upon hearing the parish church bells he was guided back to safety and thus in gratitude he left money for the bell ringers to ring a peel. This apparently also happens in January, however the trustees did not know when.

It is heartening to see Langley’s bequest continues to give support to those in need…although he clearly had little thought of mobility in snow ladden Januaries – perhaps not the best time for aged widowers to travel about!

The Twelfth Night at Guildford founded by Pilgrim Morris founded in 1972. The groups dressed as characters from a plough or Mummer’s Play tour a number of Guildford’s pubs injecting a necessary shot of jollity into a drab winter’s night. As they tour around a fair number of followers are attracted to their infectious fun. Their costumes in themselves were a riot of craziness and eccentricity covered with ribbons and adorned with Chrimbo iconography one even included a miniature Father Christmas!

I arrived at the first pub having travelled across the capital from the Jeffrey’s museum’s Twelfth night and came across them mid mummer’s play as St George was being speared by a Saracen in such a rather cramped location that I feared as he feel he would hit his head on a table.

At the play’s conclusion seeing the revival of St George to cheers one of the Morris mean appeared with a cake and urged people to eat. Some were rather reluctant whereas others upon finding the purpose dived in and took a piece hoping to find the pea and bean. The pea and bean, hidden in the cake, being a Twelfth Night tradition, whosever would find it would be King or Queen of Misrule. The taker was unsuccessful. However, soon a partaker looking like they’d swallowed something a bit odd, reached into his mouth and extracted a hard bean – a cheer went out and he was celebrated as the King for the night.

There was then a sword dance again in the rather small area and it was perhaps thankful the swords were not the sharp kind.  One of the Morris then moved a chair and upon standing on it began to chalking the beam as traditional for epiphany. Their version slightly different:

“Finally, at each place, three crosses are chalked onto the beams to protect the house and bring good luck for the next year.”

There were more cheers.

Off we went to another pub and hear the wassail bowl was out. This a wooden bowl filled with spiced ale and was being offered around and drunk enthusiastically like a communion wine and in a way this was the intentions.

“In each of the five places that we visited, the Guildford Mummer’s play was performed followed carols and wassail songs – not the boring standard issue ones but traditional versions, some of which are local to Surrey.”

These songs were particularly uplifting at their final pub The Royal Oak where gathered around the stairway and up on the balcony the Morris dancers and accompanied impromptu choir sung their hearts out in their mixture of traditional and not so familiar carols. The custom is so well established now that it has its own followers who regularly attend and know the words of the more obscure and localised carols much as they do around Sheffield.  As noted by Phil again:

“There are always plenty of singers who come along to bolster the unofficial choir and, as happens each year“

One of the celebrants, morris man Phil Gorton of Farncombe said: “The pubs were packed and it was a riotous night!””

If you are in Guildford or perhaps not and are free on Twelfth Night join the wassail at Guildford for a great experience – second to none as it has something customwise for everyone – including free food and drink!! 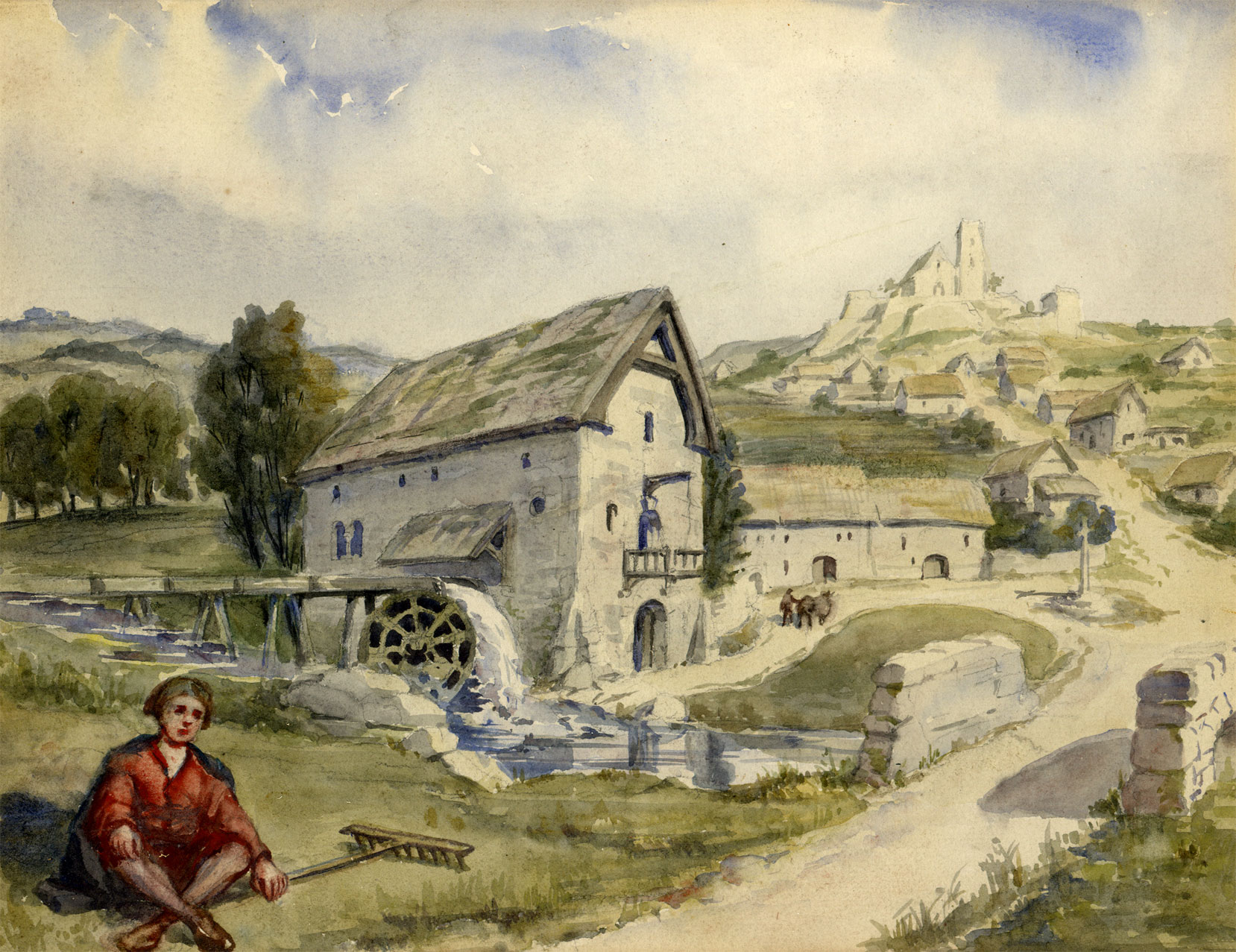 This demised custom had a great story behind it:

“Thomas Moseley, passing through Walsall, on twelfth eve, saw a child crying for bread, where others were feasting, and, struck by the circumstance, made over the estates at Barcott, &c., to the town of Walsall, on condition that every year one penny should be given each person on that day, so that no one might witness a like sadness.”

And as such established the Moseley Dole as recorded in An abstract of the title – of the town of Walsall, in Stafford, to valuable estates at Bascott, &c., in the county of Warwick, with remarks by James Cottrell, 1818. which reads:

“In 1453 Thomas Moseley made a feoffment of certain estates, to William Lyle and William Maggot, and their heirs, in trust, for the use of the town of Walsall; but John Lyle, son of William Lyle, to whom these estates would have descended, instead of applying the produce of the estates for the use of the town, kept them, and denied that the property was in trust, pretending it to be his own inheritance; but the inhabitants of Walsall not choosing to be so cheated, some of them went to Moxhal, and drove away Lyle’s cattle, which unjustifiable act he did not resent, because he was liable to be brought to account for the trust estate in his hands. At length a suit was commenced by the town against Lyle, and the estates in question were adjudged for the use of the town of Walsall. Accordingly, in 1515, John Lyle of Moxhal, near Coleshill, Warwickshire, suffered a recovery, whereby these estates passed to Richard Hunt, and John Ford, and they, in 1516, made a feoffment of the land, to divers inhabitants of the town of Walsall, in trust, and so it continues in the hand of trustees to this day.”

It is recorded that:

However there is some discussion over where the dole really begun:

“The masters of the guild of St. John the Baptist, in Walsall, a religious fraternity, with laws and orders made among themselves, by royal licence, appear at this time to have been the trustees; for they received the rents of these estates, and kept court at Barcott. King John granted to every arch-deacon in England a power of gathering from every ‘fyer householder,’ in every parish, one penny, which were called Peter pence; therefore I am inclined to think this religious fraternity were the beginners of this penny dole, which would enable them immediately to pay their Peter Pence or, perhaps they might stop it in the same manner as the bellman does the lord of the manor’s penny.”

The author of the extract:

“It would be a good thing if this dole was given up, and the rents of these valuable estates, which are now considerable, were all applied to charitable purposes.”

The dole ceased in 1825 after some local resistance it is believed. Twelve alms-houses, were built with the money in the hands of the corporation with the money apparently.