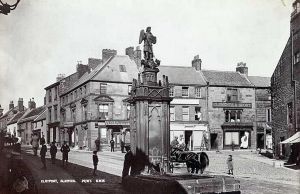 Many people will remember the latest incarnation of Alnwick Fair revived in 1969 to 2007 which is sadly discontinued. However W Davidson the 1822 History of Alnwick tells of another curious custom associated with a more ancient fair he reports:

“On the Sunday evening preceding the fair, the representatives of the adjacent townships that owe suit and service to his Grace the Duke of Northumberland, and the constables of Alnwick, with several of the freeholders and tradesmen, attend at the castle, where they are freely regaled. The steward of the Court, and the bailiff with their attendants, then proceed from the castle to the cross in the market-place, where the bailiff proclaims the fair in the name of the Duke and Duchess of Northumberland, and calls over the names of the various townships that owe suit and service; viz. the townships of Chatton and Chillingham, four men, Coldmarton and Fowbury, four men; Hetton and Hezebrigge, four men; Fawdon and Clinch, four men; Alnham and Alnham Moor, two men; Tughall and Swinhoe, two men; Longhoughton and Denwick, four men; Lesbury and Bilton, two men; Lyham and Lyham-hall, one man; with the principal inhabitants of the borough of Alnwick. “

The role of these men was made clear that:

“The representatives who attend for the several townships in service are obliged to keep watch at different parts of the town the night before the fair, which has been a custom from time immemorial.”

It is also said that:

“On the fair-day the tenants of the Duke within the barony of Alnwick attend at the castle, when the steward and bailiff proceed from thence to the market, and proclaim the fair as before. They then go to Clayport Street, where the fair is again proclaimed, and from thence to the castle. The above townships, by their attendance, are exempt from paying toll in the borough for twelve months, but if they do not attend, they must pay the same till the next year.”