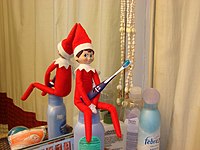 Kate Whiting What is Elf on the Shelf? All you need to know about the Christmas craze

“Horrible passive aggressive doll that ‘watches you’ then tells on you to Santa.”

For many years we had plastic Elf sitting with his knees firmly tucked under his chin. He sat – because he had loop in his head – firmly hanging from one of the branches of our annual Christmas tree. He was a bauble like many of the others – currently the weirdest one on the tree is a pickled gherkin but that’s another story! Then as the current millennium developed a new Elf appeared on the Christmas roster and the term Elf on the Shelf became more and more frequently heard. Why?

Another book on the she-Elf-ie!

In the Strange and Sweet history of Elf on the Shelf the Huffpost summaries the story as follows:

“According to the book, the elf is a “scout elf” who sits on a shelf or table or another part of a family’s home to observe the children’s behavior during the holiday season.

Each night, the elf flies back to the North Pole and reports the kids’ actions to Santa Claus to inform his naughty and nice list picks. The elf then returns before the children wake up and settles in a new part of the house, creating a hide-and-seek game each morning.”

The Elf would visit from Thanksgiving to Christmas Eve suggesting that parents would set up the Elf between these areas.The authors, Carol Aebersold and her daughter, Chanda Bell of thisT 2005 children’s picture book appear to be almost single handedly created their own custom – developed and spread by social media. Carol Aebersold stated that they got the idea from a family tradition that she Carol started for her two children in Georgia USA in the 1970s:.

“We had an elf growing up for as long as we can remember. Our elf was named Fisbee, and Fisbee of course would report to Santa Claus at night and be back in a different position in our house the next day,” Pitts explained. “We loved it. It was a chance for us to tell Santa directly what maybe we might want for Christmas, or to do good deeds so that Santa would know about them.”

When Aebersold was a child herself, Fisbee was more like an ornament that stayed on the Christmas tree and didn’t move. But the tradition morphed over time, and when she became a mother, she told her kids the elf would magically fly around at night and mustn’t be touched or it would lose its magic ― likely “to protect it, because we were pretty rambunctious children,” said Pitts.

The idea of a magical elf that flies to the North Pole at night and reappears in a surprise location was “super fun and whimsical” to the twins and their brother, Brandon, Pitts recalled. “It had all of us racing out of bed in the morning to find our elf!”

As the custom developed it appears rules developed now on the book’s website:

Of course each night once the children have gone to bed the parents would have to find new places to place the Elf; which has resulted in some amusing locations and a whole range of images shared on social media.

It is thought that 2007 was an important point when actress Jennifer Garner was photographed with the Elf on the shelf box and soon the booksellers were flooded with orders and toy stores started selling the product. Now over 11 million elves have been sold and it has spread across the world including Great Britain.

The custom hasn’t always been welcomed. Notwithstanding the hundreds of parents who have had to think about where to place the Elf each night and the horrendous middle of the night moment when a parent has just remembered they have not moved it, the have been other concerns.

In Who’s the Boss? “The Elf on the Shelf” and the normalization of surveillance Professor Laura Pinto reports that:

“Although The Elf on the Shelf has received positive media attention and has been embraced by millions of parents and teachers, it nevertheless represents something disturbing and raises an important question. When parents and teachers bring The Elf on the Shelf into homes and classrooms, are they preparing a generation of children to accept, not question, increasingly intrusive (albeit whimsically packaged) modes of surveillance?”

But psychological impact aside many such as The Atlantic columnist Kate Tuttle have questioned its position as a tradition, seeing it as:

“a marketing juggernaut dressed up as a tradition.”

But then I would say so are virtually half of our current customs and traditions – divorced as they are from what they really stood for!

“My 4 year old cried and didn’t want it in the house.”

“Thomas Smith and company have endeavoured by employing special artists to produce designs, the finest modern appliances to interpret their work, and combining Art with Amusement and Fun with Refinement, to raise the degenerate cosaque from its low state of gaudiness and vulgarity to one of elegance and good taste….the mottoes, instead of the usual doggerel, are graceful and epigrammatic, having been specifically written for Tom Smith’s Crackers by well-known authors, among whom may be mentioned the late Tom Hood Esq., Charles H Ross Esq., Editor of Judy, Ernest Warren Esq., Author of Four Flirts, Laughing eyes etc.”

No Christmas table feels complete without them but they provide no sustenance and little ornament in a way. The cracker and its strange rituals around them has become a mainstay of the Christmas period. But how did a gunpowder and toy filled device end up being so ubiquitous? Instead

The cracker’s origin can be traced back to the 1840s but it has soon become a staple. It’s a simple idea a cardboard paper tube wrapped in brightly coloured paper and twisted at each end. It is what is inside that makes it special – two strips of gunpowder coated card, a paper crown, a gift and a joke. Often the latter being unfunny and possibly decades old.

The tradition thus has developed that at the start of the meal the arms are crossed over with each hand taking a cracker firmly. Each person pulls at the same time, the aim being to be one of the lucky recipients of the end with the hat, gift and joke. As they do so the friction on the paper as they pull apart causing the bang.  How and why this developed is unknown but it is not dissimilar to that done at New Year’s Eve.

The history of crackers can be traced back to one sweet manufacture called Tom Smith who in London had developed bon bon sweets which he made by a twist of sweet wrappers around. As the sales of these sweets began to drop he looked at novel ways to increase his sales. At first he added love poems and marketed them as gifts men gave to their wives and girlfriends at Christmas this later developed into the corny jokes and mottos. An example of an 1891 motto is:

“The sweet crimson rose with its beautiful hue,

Is not half so deep as my passion for you,

‘Twas wither and fade, and no more will be seen

But whilst my heart lives you will still be its queen,”

Then in 1847 he came across the idea of adding the banger mechanism after being influenced by he had heard the sound of a log crackling in a fire. He continued placing sweets into the bon bons but in time these themselves were abandoned and small items were placed inside. These were described as:

This new product he marketed as Cosaque apparently from the erratic dancing of the cossacks or the sound of the horses depending where you read it, but soon as other makers decided to adopt the idea. It is said that as overseas manufacturer copied the original design, Tom decided to develop eight different types and distributed these throughout.  He successfully saw off the competition and his business spread but the name ‘cracker’ had by this time stuck, clearly describing the sound of the pulled cracker. Finally Tom’s son Walter Smith added the paper hats in 1910 and then the jokes in the 1930s.

Now you get virtually anything in a cracker from an Aston Martin Vanquish Coupe, a Cartier Diamond necklace and even a Sunseeker yacht valued at over $3 million but in most some combs, bottle openers and plastic flappy fish!

“Ere Christmas be passed let horse be let blood,
for many a purpose it doth them much good.
The day of St. Stephen old fathers did use:
if that do mislike thee some other day choose.

Boxing Day for the modern household may involve the Boxing Day sales, more Christmas food or sitting on the sofa but to those until at least the 16th century who had horses or cattle it was an important day for phlebotomy – or blood-letting. It was common enough a tradition in the late 16th-century for poets such as Truse, who was also a farmer whose work was a poetical book on agricultural advice.

The view was widespread across Europe at the time as a quote from German protestant pastor and playwright Thomas Naogeorgus evidences:

“Then followeth Saint Stephens days, whereon doth every man
His horses jaunt and course abrode as swiftly as he can
Until they doe extreemely sweate, and than they let them blood,
For this being done upon this day, they say doth do them good
And keepes them from all maladies and sicknesse through the yeare,
As if that Steven any time took charge of horses heare.”

The tradition of blood letting is based on the principle of the four humours. This being that there were four elements: fire, earth, water and air, and four had corresponding body fluids: yellow bile, black bile, phlgem and blood. From the ancient Greeks onwards it was thought that an imbalance of these caused sickness and thus if there was too much blood sickness could arise!

The reasons why this was done on St Stephen’s Day is unclear. It is possible that he was thought to be the patron saint of horses. Hone in his 1826 Everyday Book suggests:

“About Christmas is a very proper time to bleed horses in for then they are commonly at house then spring comes on un being now coming back from the solstice and there are three or days of rest and if it be upon St Stephen’s day it is not the worse seeing there are with it three days of rest or at least two.”

The custom would appear to be widespread. An entry:

Item for letting our horses blede in Chrystmasse weke iiijd

Is in the Receipts and of the Canons of St Mary in Huntingdon  Hone suggests that his sources that the tradition was brought to Britain by the Danes and states a book called Wits Fits and Fancies states:

In John Brand’s Book of Days he quotes John Aubrey who says:

“On St Stephen’s day the farrier came constantly and blouded all our cart horses.”

The wisdom of blood-letting as medicine improved disappeared as people realised by draining the blood they were making the patient potentially more ill or prone to disease. Consequently did this most curious custom but one would imagine it survived in rural areas longer than one would have expected.