In a 1553 Charter of Mary Tudor’s reign she bestowed upon them their own Sheriff and separated it from Staffordshire being its own County. Amongst the duties of this newly appointed post was to oversee the boundaries of the fairly newly instated city and such the Sheriff’s Ride was established:

“perambulate the new County and City annually on the feast of the Nativity of the Blessed Virgin Mary”.

This was confirmed by Charles II which read:

….and it has continued ever since. The Sheriff’s ride rather than taking place on the Feast of the Nativity of the Blessed Virgin Mary…the 8th of September it is the nearest Saturday. And despite Lichfield becoming party of Staffordshire back in 1888 the ride still goes on! An early reference is from 1638 in St Michael’s church registers which reads:

I arrived in Lichfield just as the party was leaving the Guildhall. They were moving at quite a pace and the sight and sound of 50 riders on the hard road surface was something to witness. Of they were to go around the 20 miles of the border. In the morning the group followed the northern and eastern boundaries and stopped for lunch at Freeford Manor. After their break they returned to their horses and surveyed the western and southern areas and again stopped for tea at Pipe Hall. 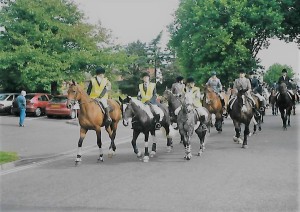 Horsing around and around

F. W. Hackwood (1924) in their Staffordshire Customs, superstitions and folklore records that in 1921 it:

“was large as ever. The assembly (which included the Mayor, the corporation nd the city officials) met at the Guildhall where the Sheriff Councillor F. Garratt entertained his friends with light refreshments before starting. A number were mounted on horseback, but every other known means of road transport was also brought into use, a curious admixture of the ancient and the modern”

This must have been an odd if slightly dangerous site and although people follow with cars it is now at a respectful distance and the perambulation is only done by horses who pay £30 to join. Recently a so-called ‘Alternative Sheriff’s Ride’ with push bikers has been established and one day perhaps it might take over! I was also amused to see the Sheriff wearing a day-glo jacket as if 50 odd horses isn’t as noticeable on their own cantering down the road! Hackwood (1924) continues:

“The route lay up Beacon street to cross-in-hand lane, and on to the Stafford Road at Lyncroft Hill. From thence to Lea Grange the way lay across fields till the lane leading to Elmhustr and Stychebrook was reached, and hence in the direction of Curborough to Brownsfields. After traversing more fields the way lead to Gosling land and then on to the Trent Valley Road; the railway was crossed and thence by way of Darnford Mill the party came to Horse and Jockey Inn at Freeford where they were entertained at luncheon by the sheriff with all he customary festivities.”

It is interesting to note that the party has a more upmarket luncheon location!

“Resuming the Ride the way led across fields to Knowle, then to the Birmingham Road, through fields again to Aldershawe, Sandyway, Pipe Grange, Maple Hayes, and Pipe Green and so out to Abnalls Lane back to Cross-in-hand Lane. Here a touch of the picturesque was lent by the presence of the Macebearer and other uniformed attendants, aided by the glorious weather of a fine autumnal day.”

Very little has changed. Except I imagine the smarter dress of the participants who must wear hunting or dressage and indeed there is a prize for the best dressed. At around 6 the perambulators arrive back at the city where the ceremonial sword and the Macebearer still met them now with the Dean of the Cathedral and then ceremonially leads the retinue down back to the Guildhall where a crowd was waiting to welcome the tired party and their even more tired horses!

It is worth noting that the length of this boundary appears to change according to who reports it. Hackwood states its is upwards of 16 miles, Jon Raven in his 1978 The Folklore of Staffordshire states it is 24 miles and latterly 20 miles is quoted – they appear to be doing more that perambulating if the length is increasing.

What is unusual is that this ceremony takes place in September which is a less convenient and less calendrically significant time. It seems likely that the ride was a possibly originally done at Rogation and by church authorities before the charter but no evidence can be found. And it was probably not a ride – but a walk – a rather long one…which would have been difficult to do in one day no doubt!