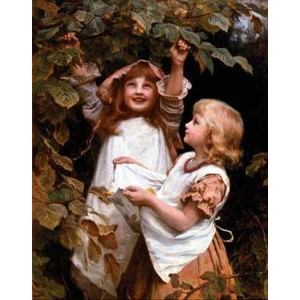 “All the youths are now a-nutting gone.”

Grim the Collier of Croydon

The 14th September passes by without fanfare these days but for many it was Holy Cross Day when the True Cross was revealed but in England the day became associated with a more domestic custom…one actually possibly at loggerheads with the church. For in some cases these nuts were brought into church. In Edward Brayley’s Topographical history of Surrey (1850) notes that at the church at Kingston upon Thames:

“the cracking noise was often so powerful, that the minster was obliged to suspend his reading, or discourse until greater quietness was obtained.”

In this case Steve Stroud (2001) The English Year notes that it was believed to be part of a civic custom about selecting a bailiff although the author notes he cannot see the connection. But it might give a reason for Oliver Goldsmith’s Vicar of Wakefield (1766) stating:

The nuts collected considering the time of the year were hazelnuts and accounts of ‘going a nutting’ can be found across the centuries. Eton schoolboys were granted a half day holiday in 1560 to gather nuts…however one wonder what would greet them when they arrived. For clearly other activities were abroad which were far from innocent. The phrase soon became a bye word for sexual proclivity and soon collecting nuts would become a nod and wink for something else. Certainly by 1660 a common expression would be:

The Devil was soon associated with the custom as a way to avoid such proclivities. Poor Robin’s Almanack of 1709 contains the following verses:

“The devil, as the common people say, Doth go a nutting on Holy-rood day; And sure such leachery in some doth lurk, Going a nutting do the devil’s work.”

Going nutting was particularly avoided on Sunday when it was thought the Devil would be abroad disguised as an kindly old gentlemen who would pull down branches and whisk you away. Poet John Clare notes that certain days he would be likely found: