Throwing things at the general public appears to be a sub genre of custom. You could spend the large part of the year having anything ranging from pennies to pies, chocolates to cheese! However, the most favoured forms of preferred projectile is bread..one of the least known perhaps purveyors of baked ballistics is that of the Wath upon Dearne.

The current custom is a revival suggested it appears by a local historian cum baker…doesn’t every town have one, called Tim Binns. Eschewing a previous publicity attempt of making a giant pie, which fed 480 people…after all giant pies in Yorkshire aren’t unusual, the team behind the Wath festival in 1980 looked to an old custom for revival. They unearthed the WIll of a Thomas Turk which provided money so that 40 dozen penny loaves should be thrown from the “the leads of the Church” on St Thomas Day … forever”. Of course the shrewd reader will say that St Thomas day is in December…but a sensible change in date doesn’t deter a good revival, after all you wants to be on top of a church tower in such a windy cold and slippery time of the year?

Of course distributions of bread doles are not unusual. Throwing them from church towers is..why? Was it that the poor here were particularly athletic or rather more uncouth and unclean? Perhaps the later and distribution the dole this way would avoid any contact. Let us hope it was not for some perverse pleasure of its instigator who might have liked the idea of his town folk scrambling in the soil for sustenance. Whatever the truth the more virtuous Victorians clearly didn’t like the fighting for food which ensued and in 1870 banned it…although the charity still continued in a more genteel and perhaps less genuflecting fashion.

The modern custom has all the familiar elements – Morris dancers, procession and associated festivities. I arrived as the Harthill Morris entertained the crowds with some fleet of foot dances. At 11.30 the Vicar arrived dressed in a Georgian attire with bowler. She was accompanied by her ‘lawyer’ similarly attired. She took great pleasure in reading out the Will giving a sideways wry smile and a wink to the line ‘to the Women who takes me to bed’ and one wonders what the story is behind the ‘natural born daughter’. 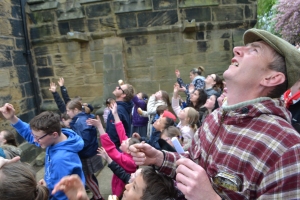 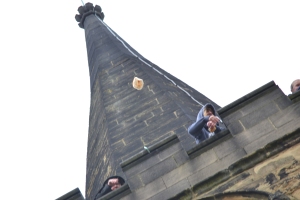 In the church the full benefaction, one of a considerable number for such a parish, can be read:

“1810 July 24th Thomas Tuke Esquire bequeathed the interest of £4 to be distributed in Penny Loaves at this church on Christmas Day by the church wardens. Annually forever.“

However, as can be seen no mention of throwing bread, but that was outlined in the Will. At the church the will is read again and the bread basket attached to a rope and pulled up onto the narrow church tower…hopefully to join more above! The Morris dancers filled the void whilst a large crowd fronted by large numbers of chattering children, nervously eager to catch this free lunch. The church struck 12 and all heads looked up. Then the heavens opened and the rather surreal and not a bit too scary sight of flying tea cakes could be seen above us. Kids scrambled feverishly grabbing the buns…In front of me a small boy had one bounce off his head, another landed fair and square in his hood. Despite being so large and so many actually catching them was easier said than done. I managed to grab one, or rather it landed in my hands by accident! Looking around some children were clearly more skilful and agile and had collected 10.