What do you do with your hot cross bun on Good Friday? I presume you’ll say eat it…not unless you work in the Bell Inn Hordon on the Hill, a delightful ancient 15th century inn in a surprisingly remote and unspoilt part of south Essex. Here they hang one!

Visiting on Good Friday…the first thing you notice is the crowd. Is it always like this? Probably not everyone is checking their phones…but not this time for their Facebook feeds but checking how close it was to the hanging time – 1pm! The second thing you notice are the buns…over a hundred…109 in 2015! They are of varying qualities.

The earlier ones testament of the conditions of the pub…blackened by the century of cigarette and fire smoke. Generations of the future might well be puzzled at the difference between these and the post-smoking ban buns I wonder. Some are broken and wrapped in clingfilm..others are more curious. There are four with blackened poppies inserted within…retrospectively referring to the World Wars no doubt. Those of the War years look a little unnatural and upon closer inspection these wouldn’t make a nice snack…being made of concrete. That raised in 2006 is also a little unusual. For the 100th anniversary a wooden one was made.

It is thought that in 1906 Jack Turnell became the landlord on Good Friday and so celebrate he hung a bun, having one left over…and from this rather singular act a tradition was born. However, a more plausible theory akin to this is that to advertise his new tenure he offered the buns, which was so successful a venture, he thought celebrate it. Of course this is not the only pub which hangs a hot cross bun…there are two others..and it is likely that the instigators were aware of an older tradition regarding bread and loaves backed on Good Friday. It was a widespread custom…for example a correspondent of Maureen Sutton in her Lincolnshire Calendar notes:

“You must always back your hot cross bun on Good Friday, and because that’s a holy day your bun will have magic properties…keep one back in case anyone in the family becomes ill during the following year..”

“Good Friday Bread: It is generally believed that the bread baked on Good Friday never gets mouldy; and in some parts it is used as a charm or talisman in order to make other bread ‘keep’.”

And indeed, the custom of hanging was a much more widespread domestic one if William Hone’s everyday book is to believed

“In the houses of some ignorant people a Good Friday bun is still kept for luck and sometimes there hangs from the ceiling a hard biscuit like cake of open cross work baked on a Good Friday to remain there till displaced on the next Good Friday by one of similar make and of this the editor of the Every Day Book has heard affirmed that it preserves the house from fire no fire ever happened in a house that had one.”

A brake (bread) with tradition?

The allotted time came and the manager of the pub came out and gave a brief history and talked about the Inn. He noted that traditionally the oldest resident of the village was hoisted up and attached the new bun to the beam. Not this year….this year it was decided that local ‘unsung hero’ Mike Tabbard, would do it. After an introduction justifying why he should do it…Mr Tabbard climbed the step ladder and reaching across attached the bun…and that was it..a brief event but a significant one. 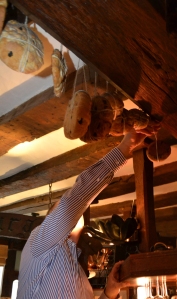 One a penny, two a penny…of these ones are free!

But that was not all, for after the ceremony, the staff appeared with trays heaving with freshly baked glistening hot cross buns. Three hundred in all! For many years these were baked in the high street bakery, but that has now long gone. Fortunately, the pub is one of the top 25 foodie pubs in the UK and can make a bun. Indeed,  these really were not only hot but delicious…the best buns I have tasted.

When is it on? It’s not on Calendar customs yet..I’ll change it when it is.