London has many customs, often associated with the livery organisations. One of the oddest of these considering its name and vintage is the Carman fellowship which despite its modern sounding name has existed since 1277. This was constructed to exercise rights over carts and carriers rather than modern cars…but it is the later which are mainly marked today.

The medieval world and modern collide

By the 16th century, the Carmen formed:

the streets of sewage  and made available car-rooms where licenses to trade were available. , and carry goods at a reasonable price. They acquired ‘carrooms’ or stands to ply for hire, effectively licences to trade. By the turn of the 20th century there were 111 licences held by 16 Carmen with 89 car-rooms. However, these declined as the carts disappeared and then in 1965 all but 1 were abolished when the Police recognising that the surviving 18 contravened parking regulations.

By the 1600s, it was agreed the City’s arms should be marked on a brass plate and numbered accordingly with a letter reference for the year much as registration plates do . By 1835, 600 were marked and subsequently every vehicle is marked at the Guildhall every year.

I cannot remember when I found about the event, but it was back in 1996 I believe. I arrived at the Guildhall where the Keeper of the Guildhall, Cartman and the Lord Mayor were awaiting, there were few visitors although they were not discouraged despite being in the Guildhall Yard. 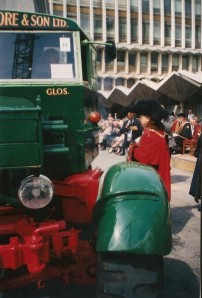 Then came a cavalcade of car(t)s as really there were very few cars…but the first up was an old horse drawn wagon, a more traditional vehicle. The Master cartman appeared to inspect it and then the Keeper of the Guildhall appeared. He placed on some gloves provided by the Glovers’ Company and then with a red hot brand held it up against it..or rather a wooden plaque.  Then in came a vintage van, with smiles all around it was repeated. The old vehicles were much the flavour of the event, but then it became a little surreal..a police car was marked with some degree of glee by the Master Carman  perhaps in memory of 1965! Then things got a little larger. A bus came in and then a lorry. I wonder whether they had paid the community charge to come in for this.  Perhaps as a bit of an in joke, a refuse truck arrived at the end as in the Lord Mayor’s Show. To which the Lord Mayor happily rose to the challenge and pushed the brand onto the plaque.  Then after the car(t)s were marked the Lord Mayor, Master Carman and Wardens stood on their rostum and the vehicles processed past and then they raised their hats in tribute. All in all an interesting event…the best of our colourful traditions slightly pointless and very surreal!

There you are just about to write a piece about a demised tradition…and lo it gets revived! The Fairlop Fair is one of these!

Tradition has it that the fair begun in an unusual way. Virtually all fairs in England start with either ancient unknown origins or from a charter. No this one. No it started from a private party. It is said that in the 1720s landowner, Daniel Day decided to have a party on the first Friday in July for his friends whilst they collected his rents. This was under an ancient oak called the Fairlop Oak. This feast of bacon and beans then precipitated into something bigger. By 1725, more people joined in and soon stalls appeared! These sold at first innocent products- gingerbread men, toys, ribbons, puppets and these grew so much that in 1736 some were prosecuted for liquor selling and gambling! 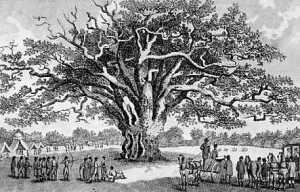 The fair was certainly an event first and fair after. Day liked to make an event of it. He was an eccentric and it was his tradition to arrive at the fair on horse drawn boat with much fanfare from some musicians. The fair grew and grew and by 1750 over 100,000 people were attending from across London and such that in 1765 it was reported that:

“a great number of people meet in a riotous and tumultuous manner .selling ale and spirituous liquors and keeping tippling booths and gaming tables to the great encouragement of vice and immorality.”

In 1767 a bough fell from the tree and Day saw that as an omen and fashioned it into his coffin. Not even death of its creator Day had an effect. Not even the authorities banning it in 1793. The Fairlop Oak fell in 1820 this did not even stop it! Not even the loss of the wood around it and its conversion to arable land in 1851. The Fair continued with controversy for in 1839 the Religious Tract Society counted 72 gaming tables and 108 drinking booths.

Despite all these issues the Fair continued to 1900…then nothing is heard until 2011! The organisers are to be congratulated in creating an event which distilled the feeling of the fair with various acts. Back was the original beanfeast. Costumed characters abounded…lots of beards particularly. In memory of the booths which consisted of the ‘living skeleton’ and the ‘real live mermaid’ we had the Fairlop Freak Show presented by the beared ladies and booths with a dancing mermaid. A story boat recreated Mr Day’s traditional boat on wheels! This arrived from Mile End and held candlelit tours! It is a splendid vehicle. There were strolling players, particularly the Highwaymen and musicians in costume which gave a real genuine flavour to the proceedings. Traditional aspects abound such as Tug of War, palmists and jugglers.  A fantastic dragon which was so real looking you could be mistaken it was real!

Of course there were fairground rides – small scale and traditional in nature and some modern aspects – singers and dancers- but after all the original fair would have moved with the times.

But gone were the gambling stalls of course until a few years time perhaps! 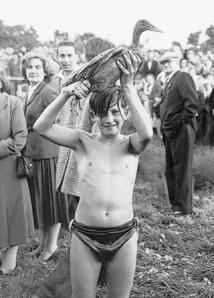 All over the countries, fetes and village fairs often have swarms of people waiting impatiently along stream banks. Why? They are waiting for someone to open a netted bag of plastic yellow ducks…a duck race has begun. This staple of any village event with a stream…has a more ancient forbearer which used real ducks!!

The custom attracted hundreds of eager participants along the Letcombe Brook, in Grove, a village near Wantage, in a custom which in the mid 20th century was said to be over 200 years old. The association of this custom with an annual Feast makes it very clear the idea behind it…to catch them and eat them. By the 20th century the eating aspect had disappeared of course.

The custom consisted of 12 races and the aim was to catch the bird without harming it bare handed. An article in the John Bull magazine of 1955 a competitor reported:

“Duck racing isn’t as easy as it sounds,’ says Albert Cook, who one year won five out of six races. I’ve seen a dozen men take twenty minutes to catch a duck.”

Another Cook, appeared to be involved in the organisation according to the Oxford Mail from July 1956:

“A blast from the whistle of the starter, Percy Cook, was the signal for the competitors, who lined up at the bridge, to jump into the water and race for the duck that Mr Cook had put into the water about 30 yards downstream.”

John Chipperfield in a recent article Ducking and diving in notes that understandably, what with the damning of the brook, large numbers of people and very nature of the event, concerns were raised over the welfare of the ducks. An RSPCA official stating:

“We strongly deplore these races. We have received many letters of complaint about them, not only from people living in Grove but from all over the country.”

However, the very fact that the ducks often eluded the captors and much of the enjoyment was about people falling in the water was not considered.  Especially as often it is said the spectators got so excited that they leapt into the water fully clothed to join in.

Yet pressure continued and legal action was threatened. Interesting one of the organisers a Mr Knight, noted sagely:

“Our races are not terrible like stag or fox hunting. The difference seems to be that our races are the poor man’s entertainment while stag and fox hunting are rich men’s sports.”

Public pressure caused it to sink without trace in 1960 a nary a plastic duck replaced it!