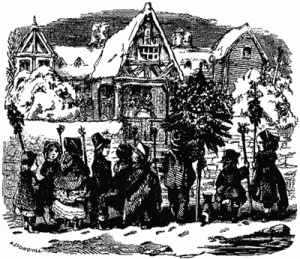 This was a common begging custom nationwide, where poorer households would avail themselves upon wealthier houses for simple provisions for the Christmas period and is recorded in most counties it appears in variants of names from Mumping from Mompen (Saxon to beg), Gooding, Corning and Thomasing or Washaeling surprising in Leicestershire. One would have thought these may have been local variants of the name but as Porter (1969) in Cambridgeshire Customs and folklore gives Gooding (Haddenham), Gathering (Doddington) or Mumping (Chatteris) as names all in the same county. Despite an association with St. Thomas the Apostle, there is no early reference. One of the earliest accounts is from an 1870s Hertfordshire notes:

In Dorset it was called Christmasing and a note made in Notes and Queries from 1872 records they would ask:

Palmer (2003) in his work on Worcestershire tells us that:

“wives, mothers, and children of all those who worked on the Beckford Estate were expected to call on Mr. King-Ross at Beckford Hall to be given a six penny piece each which was solemnly produced from a leather bag. The recipients, some 40 in number, then went round the back to be given a steaming hot cup of hot coffee and plenty of bread, spread thickly with lovely farm butter.

“The women of Hemswell used to join together and go around ‘mumping’ to the various houses on St. Thomas’s Day-women who were ashamed to beg – but it was not looked on as begging, but as their due. They were given goods in kind.”

Sutton in her Lincolnshire Calendar notes that in Connisby in 1914:

“Old women would come mumping and mother would give them homemade cakes, half a cake or a whole one sometimes.. They came very early, I was still in bed, before 7 o’clock. They used to sing ‘Here we come a mumping..”

Whilst commonly old women, particularly widows were central to the custom, the men at the time were probably working, a contributor to Fenland Notes and Queries said:

“old men and old women and even young women pass from house to house begging for alms.”

.A common rhyme was:

In Staffordshire a local author notes:

“In the days of the Georges, when red cloaks were commonly worn by the beldames of every parish, it was a usual sight to see, in the grey light of a December, groups of figures bent and withered, going from door to door, wrapped in these curious garments and hear them piping ‘in a childish treble voice; the following rhyme:

“Well a day, well a day, St Thomas goes too soon away, the yiyr goodinf we do pray, For the good time will not stay, St Thomas grey, the longest night and shortest day, please remember St. Thomas’s Day.”

Palmer (1976) notes in Warwickshire the rhyme would go:

“A Christmas gambol oft can cheer, The Poor man’s heart through the year.”

In Mansfield they said the following:

The food varied in Dorset they:

“Receive substantial pieces or ‘hunks or bread and cheese, bread and meat, or small sums of money.”

Some specifically asked for corn and hence the term ‘a-corning’ was used. More often it was used to make frumenty, with it baked and sugar and currants being added, it was then boiled in milk and egg and flour added.  In Worksop, Jackson (1992) notes that gifts of money, foodstuffs, oatmeal, potatoes, pieces of bacon, milk, eggs, currants and cheese were commonly given. Rudkin (1936) notes that in Willoughton, they were always given potatoes and on the Isle of Axholme tea or bread. In East Anglia they often took a spray of holly as a gift of thanks according to Porter (1974). In Staffordshire, gifts of a substantial amount were given a mistletoe sprig instead.

The decline was in the 1930s it appears, although Palmer notes someone undertaking it in the 1950s. Perhaps this snippet from Sutton (1996) gives an idea of one of the reasons why:

“This old lass went mumping for spuds, the farmer told her to clear off. so she said ‘You might not get a good crop next year’. The funny thing was, he didn’t. Not many were as mean as that.”

“Look out of the window facing the road and on the 21st, any time between 7.30 am and 12 noon, you will probably see groups of women apparently eagerly discussing where to call. They will cast dubious looks at some houses, shake their heads at others and finally decide on points of attack, chiefly amongst the old residents. Those residents who favour old customs are usually armed with small change, coppers, or food tickets of small value, such will have as many as seventy or eighty callers.”

Of course this indicated the ultimate reason for the decline, as communities became disparate and less cohesive, the very close knit nature of these villages began to disappear and so the custom began to die out. Sometimes as in Dorset this lead to Thomasers going further afield:

“those only refused the dole who did not belong to the parish.”

Not only that, but as Charlotte Burne notes in Shropshire folklore of 1883:

“It is in fact a custom very likely to be abused and to degenerate into a nuisance; the strongest, who could walk farthest, getting the greater number of doles; several members of a family going to the same house at different times in the day, and thus getting an unfair share.”

Such an action lead to the establishment of doles and Burne notes that in:

“1870, the farmers around Clun determined to put a stop to the begging, and instead of giving to all comers, they agreed to send their contributions of corn to the town hall to be distributed under proper supervision to the deserving poor.”

Nottinghamshire had a large number had a dozen with doles ranging from 3s to £50 for 10 poorest widows and at Worksop Priory in 1884 upwards of two hundred people, mainly widows, received a few shillings each. In the Warwickshire the Rev. John Dobyn left a bequest to ‘aged widows, and parents of large families’ in Beckford and Grafton and they would receive tickets which could be exchanged for food supplies from local tradesmen. At Alfrick, twelve penny loaves were given to each of five poor people under Thomas Markham’s 17th century Will. Some had stipulations, such as Samuel Higgs’s Will for the poor of Farnsfield and the interest given on the 21st December for equal numbers of men and women who could recite the Lord’s Prayer, the Creed, and the Ten Commandments before the vicar. This may have seen hard, but if they could do it they would have the money each year for the rest of their lives. Others provided garments. In Sturton-Le-Steeple, it is noted that the work of the charity worked in 1911:

“They received suits ranging from 2s to 10s according to circumstances. The suits of the clothes were arranged who were to have them this Christmas. Finally it was restricted to have six suits to be given to the deserving of the village. The distribution took place in the school at noon. There was, however, very little mumping around the village this year, this old practice is obsolete.”

In Nottinghamshire, Diana Gibson left £50 at Rolleston in 1882 to invest the interest being paid to 10 of the poorest families on St. Thomas’s Day. The dole was worth £21 74p between 1967 and 1972 and it was noted locally such small amounts could be considered demeaning and divisive in a small community as Rolleston and as such it was wound up by 1996, the £450 being used to provide a village seat, with plaque and fine trees. With such movements clearly this was the final coffin in the custom.