Easter Monday was a bit of a wash out this year. There was a constant drizzle in the air and with that in mind I decided to investigate a custom which would at least allow some shelter. My research revealed that for the last 20 or so years in Greenwich, London, the ancient custom of heaving or lifting had been revived by the local Morris side, The Blackheath Morris. 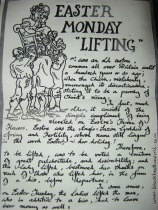 The origins of the custom are like most a little obscure. Despite what the leaflet given out by the Blackheath team which states that it is a pagan ritual liked to ‘Eostre’s Throne of Spring, most folklorists link it to the idea of symbolising Christ’s resurrection and such it was frowned upon by the church. Certainly in 1834, in Oswestry, Shropshire, Joseph Whitehead a Wesleyan minister considered it to be a relic of popery and apparently travelled ‘a mile round part of the town in a circuitous path’ to escape it’ Despite this it appears to be well received by some. A Thomas Loggan writing in 1799 noted:

“I was sitting alone last Easter Tuesday, at Breakfast, at the Talbot at Shrewsbury, when I was surprised by the entrance of the female servants of the house handing in an arm-chair, lined with white and decorated with ribbons and favours of different colours. I asked them what they wanted. The answer was, they came to heave me ; it was custom of the place on that morning; and they hoped I would take a seat in their chair. It was impossible not to comply with the request very modestly made, and to a set of nymphs in their best apparel, and several of them under twenty. I wished to see all the ceremony, and seated myself accordingly. The group then lifted me and from the ground, turned the chair about and I had the felicity of a salute from each. I told them I supposed there was a fee due upon the occasion and was answered with the affirmative; and having satisfied the damsels in this respect, they withdrew to heave others.”

This appears to be a common place to encounter heaving, the maids in hotels would often do heaving as a trick on unwary male travellers or servant girls in private houses to lift their masters. In Vale Royal, Cheshire it is recorded in the account book of the manor that Charles Cholmondeley notes that she ‘gave for lifting me at Easter 2s and 6d’. Clearly the Loggan was delighted by the sexual tension of the activity, and understandably this was another reason for its attraction and dislike. For some like Richard Godson, MP , it was according to Palmer (2005) in his folklore of Worcestershire, good political ploy. Perhaps like modern MPs now kiss babies, in 1834 it was heaving! He was heaved by women at 47 different public houses and given 2160 kissed! For others it was a inconvenience Burne (1883) in her Shropshire Folklore states:

“Not many years ago, young women in the colliery district found it necessary to stay indoors on Easter Monday.”

She notes that in the 1870s it was reported

“a maid servant of the vicar of Ketley…was incautiously sent to the post office on Easter Monday and was so beset of heaving parties in the street that her master…was obliged to go out and rescue her from their hands.”

Yet at Hartlebury, Worcestershire farmer’s wives believed if their maidservants were lifted no crockery would be broken that year. 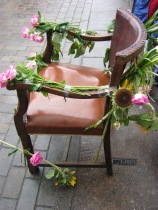 The custom differed across the country. In Chester, it was common to rope off the street (see Hungerford Hocktide post) and demand any a fee or else be lifted. A letter from 1771 quoted by Simpson (1975) in Folklore of the Welsh Border states ‘a number of females stand at all gates of the city’. She also notes that it was accompanied with an Easter hymn and was a private affair, the chair similar to that at Greenwich being covered with greenery, ribbons and flowers. In Herefordshire and Shropshire they would sprinkle the women’s feet with water using a bunch of flowers as the sprinkler. Raven (1978) in his work on Folklore of Staffordshire notes that between 9 and noon bands of women and men roved the streets of the towns and villages looking for victims. Like at Greenwich they were lifted three times and they had to kiss or pay a forfeit of silver. He notes that some were chaired, some bodily lifted by others and others taken hold of the arms and legs and flung aloft as in the playground bumps Palmer (1976) in his work on Warwickshire folklore notes:

“On Monday the men heaved the woman that is took them up lengthwise in their arms, as a mother would her baby, and kissed them. All were served alike – the buxom, the slender, the comely, the plain, the saucy and the shy.”

Palmer quoting a Birmingham observed states that the woman’ s day, Easter Tuesday, was the most amusing: 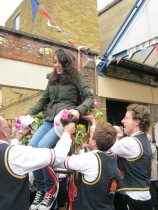 I don’t know the history of lifting in Greenwich although tumbling was a similar custom undertaken in the park, of which more will be elaborated in future posts perhaps. As noted this revival has been done since the 1990s, although despite this it was completely unknown to the Tourist Information or indeed the pubs and inns supposedly the team where dancing outside of, and I did think not finding them in their designated locations at the correct times suggested kindly by their bagman that the rain had curtailed their activity. Yet despite the rain the Blackheath Morris did arrive with their flower decorated chair or perhaps throne. A chair not too dissimilar to that carried in those earlier cases. Interestingly, some modern folklore had become associated with this case…Someone sat in the chair as it rested between being used, but quickly vacated it!  This was upon being told that there was a link to fertility! The Morris team was a male team of course of varying ages and it was nice to note some younger men in their side. Indeed, for once, one could be witness perhaps the unusual association of Morris men with young (and dare I say attractive) women attracted by the bizarreness and cheeky nature of the custom. After a traditional dances whether with handkerchiefs or poles, the chair was brought to the front of the team and then a women was then invited into it. Then after a countdown with at least six men around her lifted into the air. This was done three times in all and at the end all the Morris men lined up to claim their kiss….at least twice or thrice for some of them, all introduced as Arthur (insert comical punning reference afterwards…brain/loaf etc). At one point a random member of the public seamlessly inserted himself into the row to steal a kiss. No fees were paid by the ladies below Indeed the smiles and laughs after the event from the women heaved certainly underlines the Blackheath Morris’s belief that ‘to be lifted was to be voted a creature of great pulchritude and desirability. 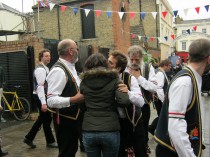 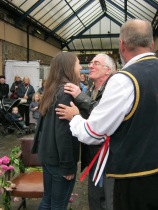 So what about the women lifting the men of Greenwich?

As noted the tradition on Easter Tuesday, of the women would lifting the man…perhaps a slightly more arduous task considering the average mass of a Victorian man is not done at Greenwich! Why? I was informed that the Blackheath side attempted to invite their lady counterparts to revive this part of the custom but found.

The demise and revival

Many people wanted to avoid heaving but the result could be drastic as noted in the 16th century:

“the tuesday after ester hollydays ij yo’nge men od Slop whose names were Esmonde Reynolds and Robert Clarke were smoothered under the castell hill hiding themselves from mayds the hill falling thereof upon them.”

Which seemed quick a drastic way to avoid heaving although the author does not state whether the men lived or not! Raven (1978) hints the reasons for the decline in his work on Folklore of Staffordshire that:

“the custom was particularly vigorous in the early part of the nineteenth century when the excitable, unkempt, vociferous and sometimes drunken band of heavers became the subject of adverse comment from the press and officialdom”

The tradition continued until the 1880s in the urban areas of Birmingham and later in villages such as Avon Dassett, and appears to have lingered on the longest in Cheshire and Kidderminster dying out in 1900. In Herefordshire the custom died out in 1869 having ‘ degenerated with wickedness’ and it would be probable that this was due to the drunkenness of these gangs brought them into direct conflict with the police and as such it was stamped out or else as Burne suggested the women staying indoors, to avoid the ‘wickedness’…. So it is nice to see it revived: a simple but significant Easter custom. Long may the Blackheath continue this revived tradition and one hopes that it spreads and is revived elsewhere…certainly it would appeal to many being a custom associated with a great deal of joy and enthusiasm. I hope to establish a private revival next year!